We have several solutions for all these chimney leak issues. We also do on site consultations and leak testing to determine exact leak locations. We pride ourselves on our knowledge of chimneys and leak issues. So call today or email with any questions or have us come out to examine that pesky leak.

A chimney can have water run down the outside or it can also run down the inside. Sometimes water will down the interior of a chimney and then seep out at a mortar joint. Another very common occurrence that some people think is a flashing leak is a internal moisture issue. The picture to the left shows a chimney with internal moisture. It is normally caused by a gas furnace or hot water tank. The excessive moisture can not vent all the way up the chimney and condensates. When it condensates it leaves behind all of its trace chemicals leaving moisture and stains on the brick.

This can be resolved by having the flue lined with stainless steel to contain all the flue gases and moisture from escaping. It can also occur in an attic where the flue gases hit a temperature change in an attic. A very common time to see this type of problem is in the spring. This is because the chimney is still cold and its warm enough that a furnace doesn't run all the time. So hot water tanks venting into the chimney have no forced air to help carry there moisture out the chimney. 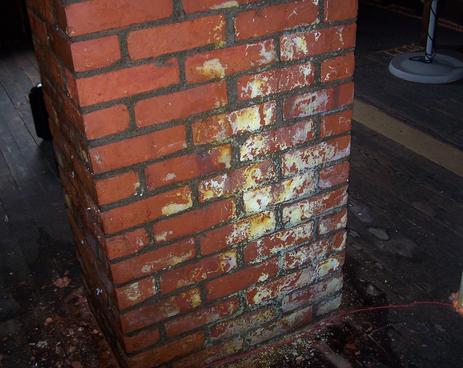 The flashing on the chimney is the seal between the chimney and the roof. The most common type of flashing is a metal step flashing. The flashing should go under a shingle and then fold up onto the chimney. The chimney then should have the mortar joint cut so the metal sticks inside the joint itself. We run into issues often where shotty roofing companies do not step flash the chimney when a roof is redone on a home. The do what we call a lap flash. the flashing goes under the shingle and folded onto the chimney, but instead of tucking it into a mortar joint. They stick it to the brick using some sort of glue or silicone. This is not the proper way to fix a chimney because over time the glue or silicone can dry out letting the metal pop off the chimney creating a leak.

Most commonly the symptoms in a flashing issue are

The most common way to fix a flashing used is tar or roof cement. Tar however is a band aid for the issue because it will dry our and crack allowing water back into the already damaged chiumney

We respond to issues with chimney leaks all year but primarily in the spring months when the snow melts. We also pride ourselves in our ability to pin point the leak issue where many other companies can not. Many homeowners suffer with chronic chimney leaks that they have been dealing with for years. Here is some helpful information to try to pin point where your issue is stemming from.