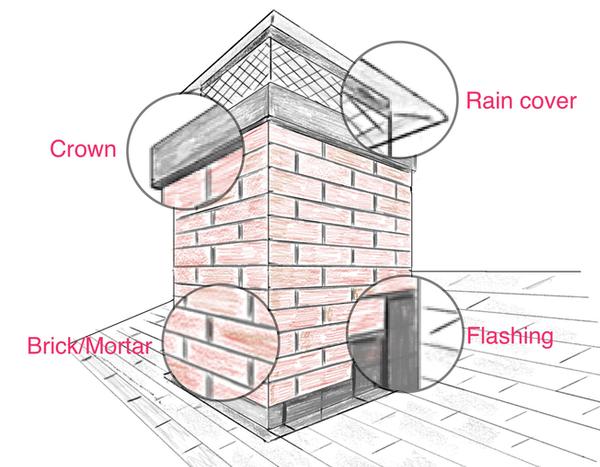 This diagram shows the entire working components of the interior of a fireplace.

The diagram to the left provides a look at the overall construction of a chimney as it would go through a homes interior.

​The diagram to the right shows the exterior components of a chimney and their correct terms.

​This is an example of a positive connection between a wood burning appliance and an existing chimney liner.

Block- Masonry building material either known as 8" which have hollow cells for construction or chimney block which are square in shape and can be stacked to create a chimney.

Cement crown- The cement crown or sometimes referred to as a (wash) is used to prevent water and the elements from entering the chimney. The crown is at the top of the chimney and according to building code should be 4" thick with a one inch drip edge around the chimney exterior. Where a wash is smoothed mortar forming a crowned surface to allow run off.

Chimney Flue- Also known as the liner, The flue is constructed of terra cotta clay or another approved system such as stainless steel that CONTAIN the product of combustion themselves and give safe passage through the chimney from the home interior to the atmosphere itself.

Chimney- Structure constructed by traditional methods of either brick, block, stone or UL listed systems that contain the products of combustion from the interior of the home to the atmosphere.

Damper- The Mechanism used to open and close the flue allowing smoke to exit the chimney.

Direct connection- The process of connecting a liner directly to the top of an appliance.
​​
Firebox- The inside of the fireplace where the fire is built.

Flashing- Flashing is the surface (usually constructed of tin) where the chimney and the roof meet. The flashing prevents water from entering the home at the joint where the two meet.

Mortar- Mortar is bonding agent used by combining portland cement and sand together. Mortar is used to build masonry chimneys and bond the brick or block to themselves for construction.

Mortar joint- the joint between two or more bricks either inside or outside.

Possitive connection- The process of connecting a appliance to an existing liner with the use of a stainless steel flexible liner only used in the transitional point between the two.

Possitive connection- The process of connecting a appliance to an existing liner with the use of a stainless steel flexible liner only used in the transitional point between the two.

Tuck pointing- Is the process of replacing mortar that has fallen out of the chimney itself. 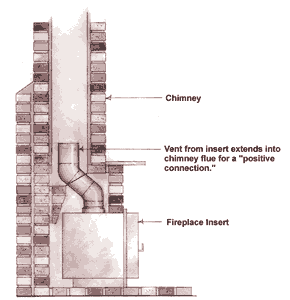